Reflections on Whiteness, Fear, and the Culture of Separation 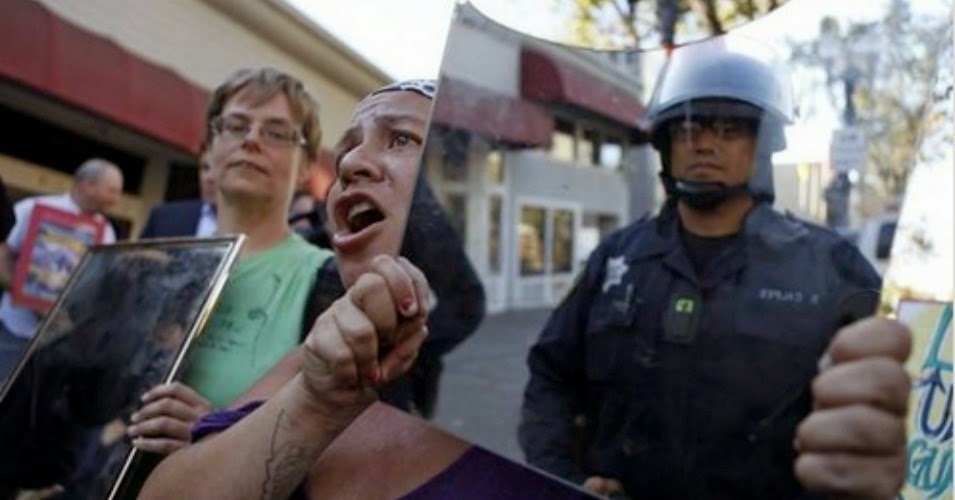 "One of the things that most afflicts this country is that white people don’t know who they are or where they come from. That’s why you think I’m a problem. I am not the problem; your history is. And as long as you pretend you don’t know your history, you’re gonna be the prisoner of it. And there’s no question of your liberating me, ‘cause you can’t liberate yourselves. We are in this together. "
- James Baldwin

I have been seeing pictures on social media of protesters holding up mirrors to the police so the officers can see what they look clad in full riot gear. While this is a powerful tactic, I want to suggest that the reflections in those mirrors, the helmets and body armor, and the police state they symbolize, are actually a direct expression of the collective fears and anxieties of our society, especially white society. As white people, it is not only dark skinned people we fear. We also fear our own repressed history. And we fear looking at our ongoing complicity in the violence that afflicts communities of color, even as we displace our seemingly limitless capacity for violence onto them, thereby magnifying our fears and justifying the police state we've created to allay them.

And then Ferguson happened. We have had more than enough of our young brothers and sisters of color being killed by police, vigilantes, and other panic-stricken white people. If you've been paying attention, it's obvious that this has been building for some time. Michael Brown, Oscar Grant, Alan Blueford, Trayvon Martin, Jordan Davis, Eric Garner, and on and on. It may be a surprise to some, but there is nothing new about black people in this country being killed with impunity. Most black folks have noticed the low value this society places on black lives. What is new is that white people have finally begun to notice the pattern and to look at it through the lens of white privilege.

There have been a good deal of discussion on social media about the very real differences in the way we, as white people, are treated, especially by law enforcement. One particular meme consists of white folks holding signs citing outrageous behaviors that did not get them shot by police. There is an excellent blog post on XOjane in which a white mother lays out all the ways she knows her white sons will be able to roll through their young lives without fear of being bothered, much less killed, by police.

As important as recognizing our white privilege is, however, this is not enough. Admitting that, as a white man, I am treated with respect and deference by institutional power (and don't ever worry that any mistreatment I may receive is due to my race) is a crucial first step. However, observing that the system is unjust in my favor does not, by itself, remedy the situation. This awareness must be coupled with collective political action. Having recognized that, as white people, we have special access to institutional power, we must use that access to demand genuine accountability and begin to co-create a truly equitable society. This is what being an ally means.

It isn't always easy to hold institutions accountable, of course. In the case of law enforcement, according to Mother Jones, "no agency appears to track the number of police shootings or killings of unarmed victims in a systematic, comprehensive way." This, in itself, is a profound indicator of the depth of the problem. To fill this void, following in the footsteps of Ida B Wells' anti-lynching campaign, the Malcolm X Grassroots Movement has issued a report documenting 275 unjustified killings of black people by police, private security, and vigilantes in 2012. As the report shows, very few of these killings resulted in the shooter(s) even being charged, let alone convicted, a fact that attests to the deep and tangled roots of white supremacy in the U.S.

The virtual police occupation of communities of color in the U.S., along with the school to prison pipeline, and the racist mass incarceration system, is not a product of individual-level racism. It is a product of us as white people acting collectively and consistently based on a distorted idea of our racial self-interest. We may not explicitly support law enforcement tactics that result in human rights violations, but our failure to oppose policies that promise to "keep our streets safe," by being "tough on crime," constitutes our tacit support.

That probably sounds a bit harsh, but I really don't mean it as an accusation. The race discourse is rife with accusation already, whether it's white conservatives and their black allies blaming black culture, white liberals blaming other white people, or activists calling out their fellows. This all helps to create and sustain the culture of separation, which is one of the centerpieces of white culture. What is most needed is healing and reconnection, and where we need to look first (and deeply) is to white socialization. White socialization teaches us not only to see ourselves as separate individuals, but to fear each other. And it teaches us to value separateness, not only from each other, but also from the parts of ourselves that are not acceptable to the false standards of whiteness (innocence, independence, reason, culturelessness).

As white people, we need to build a new consciousness and a new sense of who we are as members of the larger human family, which begins with unlearning some of our white socialization. This is certainly challenging and deeply personal work, but it is not work we can do on our own. There is no individual credential to earn or penance to pay. There is no competition to win. There is simply the opportunity and responsibility to reawaken long dormant capacities for being together in community. Thus it is work that can only be done collectively. Indeed, the real revolution begins the moment we come together with our vulnerability, our uncertainties, our fear, and our longing.